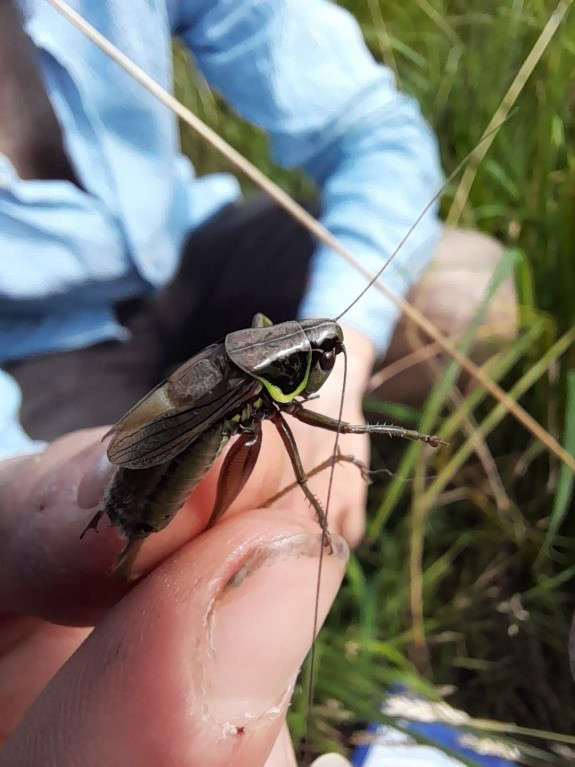 A locally rare species of cricket has been recorded for the first time at Seven Acres Local Nature Reserve in Bolton.

The Roesel’s bush cricket was discovered during a grassland management survey conducted by Kingfisher Trail Trainee, Jane Godfrey, in a project funded through the Government’s Green Recovery Challenge Fund.

Rare to the North, this is the first record of its kind for Seven Acres, a Local Nature Reserve along the Kingfisher Trail in Bolton. The record was later confirmed by John Anderson, AKA ‘Mr Seven Acres’, a local enthusiast who keeps records of all flora and fauna in the park, dating back decades.

The most interesting thing about this find is that until the early 20th Century, Roesel’s bush cricket, Roeseliana roeselii, was only found on the South-East coast of the UK. Since that time, it has expanded its range in response to climate change - whereas originally the cricket was only found on salt marshes and dunes, it can now be spotted in urban wasteland, coarse grassland and marshy areas.

Alun Morris, Friends of Seven Acres said: "The Friends of Seven Acres and their volunteers, the Seven Acres Squad, meet twice weekly to carry out tasks on Seven Acres. The tasks are focused on conservation, ecology and safe site access as the Seven Acres has become increasingly popular with families, walkers, horse riders and cyclists. We aim to carry out tasks using traditional carbon-neutral techniques while protecting habitats and biodiversity as a response to climate change and to meet the objectives of the Bolton Climate Change Strategy. The group work with support from and in partnership with The Lancashire Wildlife Trust to ensure effective co-ordination of tasks and to maximise available resources."

The find was made by Lancashire Wildlife Trust volunteer, Joe Holt, who has been an incredible help to The Kingfisher Trail grassland survey project. Joe managed to catch and show the cricket around to volunteers on the day, providing an incredible insight into this rare visitor to the North.

Joe adds: “This is a really striking creature – well worth keeping your eyes and ears peeled for in all sorts of grassy habitats. It can be half deafening when stridulating nearby (this is when they rub their wings together to sing and attract a mate).

The species has seen dramatic expansion in the UK over the past two decades – from being restricted mostly to Southern & Eastern pockets of the UK in 2005, to several records north of Manchester in 2021. They seem to be thriving, a very welcome nature success story.”

Crickets are an incredibly interesting species of invertebrate, there are ten different species found in the UK. Many people struggle to determine the difference between them and grasshoppers. They both belong to the order ‘Orthoptera’. However, Crickets and Katykids belong to the suborder ‘Ensifera’ whereas Grasshoppers and Locusts belong to ‘Caelifera’.

The most distinguishing feature of the two species is their song. Male crickets rub a scraper on one front wing against teeth on the other wing, which creates a ‘chirp’ sound. Grasshoppers also make a sound with their forewing but it tends to be more of a ‘buzz’ than a chirp or song. Another identifying characteristic is that crickets have short antennae whereas grasshoppers tend to have long antennae at the front.

Roesel’s crickets are even more distinguishable because of their horseshoe-shaped yellow coloured stripe behind the head, on each side of the thorax. There are two forms of Roesel’s bush cricket; here we found the short-winged form. The long-winged form has wings extending to beyond its abdomen known as its ‘macropterous’. Fascinating Fact: The hearing organs of the bush cricket are located on its knees.

This project is funded by the Government’s Green Recovery Challenge Fund. The fund was developed by Defra and its Arm's-Length Bodies. It is being delivered by The National Lottery Heritage Fund in partnership with Natural England, the Environment Agency and Forestry Commission. This funding is accessed through the Greater Manchester Environment Fund.