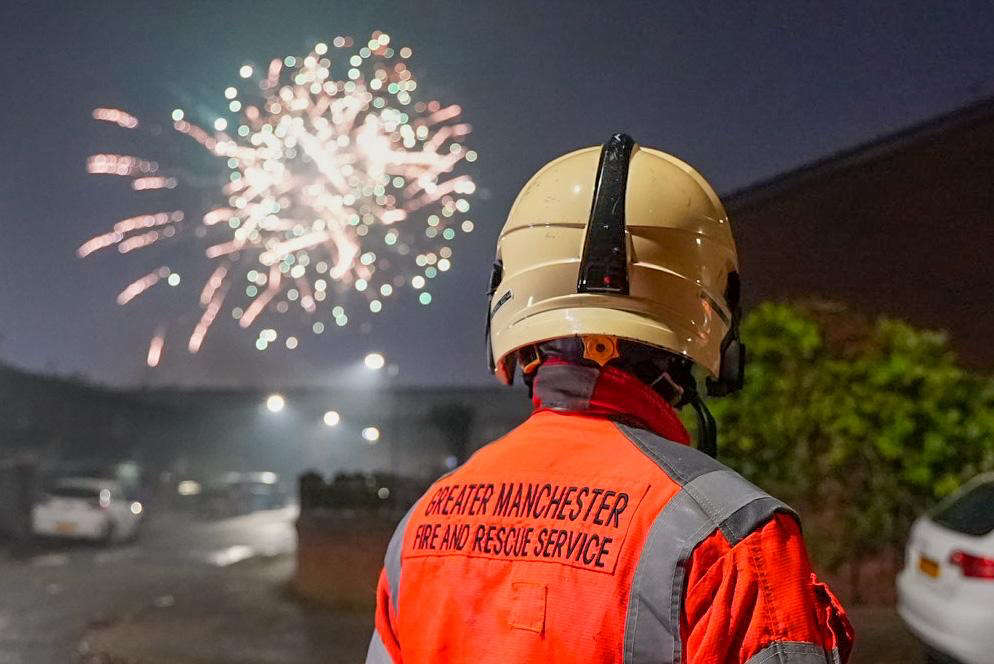 Firefighters helped keep communities safe as they attended more than 200 incidents across Greater Manchester on another busy Bonfire Night.

This is up slightly compared to last year when firefighters attended 218 incidents across the city-region.

Although the vast majority of people celebrated Bonfire Night safely and responsibly, there were isolated incidents where crews encountered anti-social behaviour while trying to perform their duties.

In Eccles, a firework was thrown at firefighters who were trying to extinguish an unsupervised bonfire. Fireworks were also aimed at crews responding to an incident in Crumpsall Park, Manchester.

Crews from Manchester Central, Salford and Broughton stations attended an incident where a firework had reportedly been put through the letterbox of a home in Salford. Firefighters arrived quickly and extinguished a small fire in the hallway of the property.

GMFRS Assistant Chief Fire Officer, Leon Parkes, said: “Bonfire Night is always a particularly challenging time for our fire crews. Our firefighters, alongside other emergency services did a fantastic job keeping the public safe and I’d like to thank them for all their hard work over the weekend.

“I’d also like to thank the control room staff at North West Fire Control, who fielded hundreds of calls and did an excellent job in difficult circumstances.

“Unfortunately, there were a handful of isolated incidents where crews were met with abuse and had fireworks thrown at them. Firefighters should not have to deal with anti-social behaviour while trying to keep people safe.

“Thankfully no-one was hurt but I’d like to remind the public that this behaviour is totally unacceptable and will not be tolerated. Setting light to fires, throwing fireworks and making hoax calls can cost lives and keep our firefighters away from dealing with life-threatening incidents.

“If you are continuing to celebrate for the remainder of the weekend, please follow our advice and enjoy yourself safely and responsibly.”

Greater Manchester Fire & Rescue Service offer a range of advice across the year, including on Bonfire Night. Click here to read more.