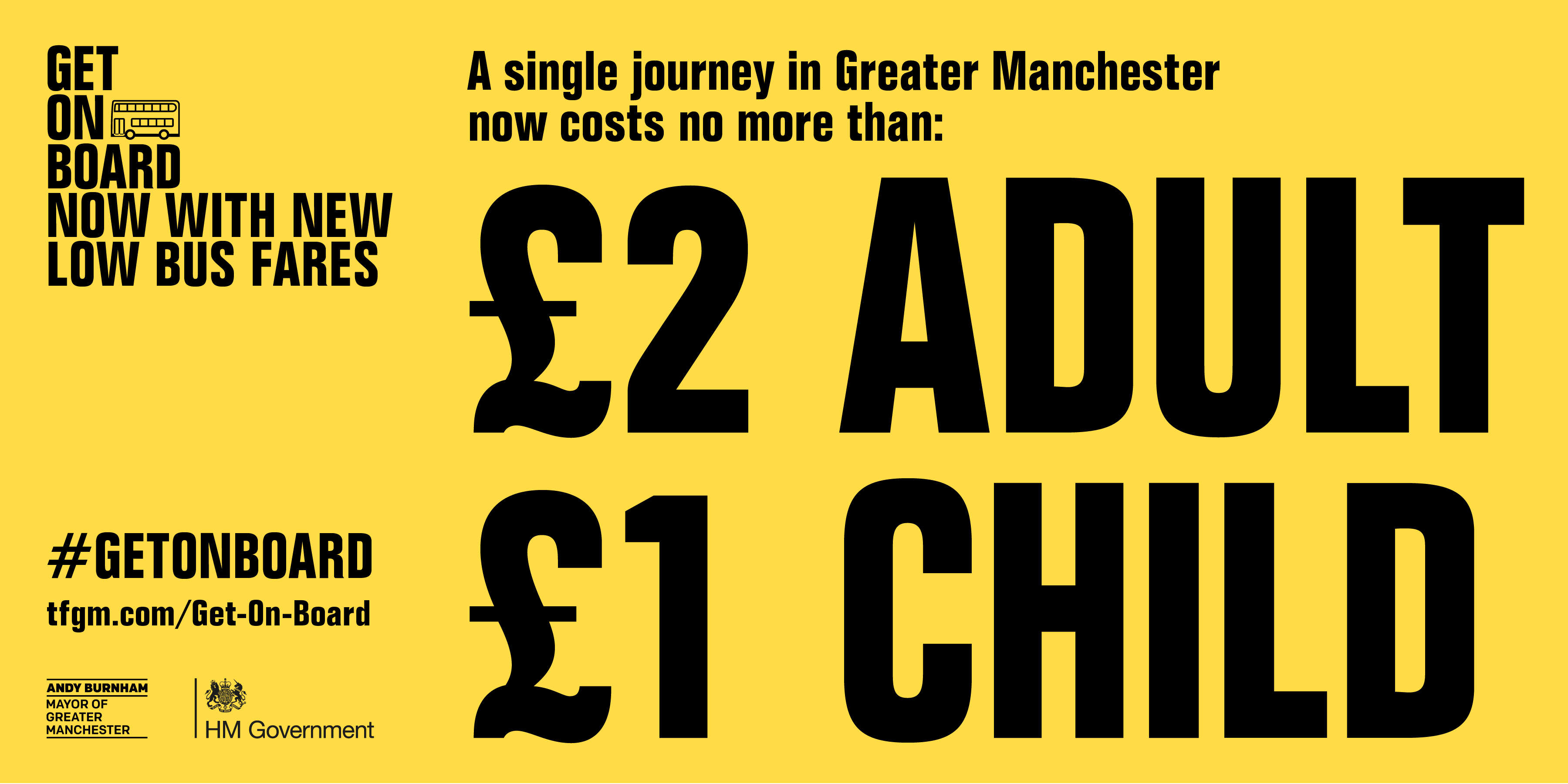 Lower bus fares were launched yesterday across Greater Manchester, a year ahead of schedule to help ease transport costs

Adults will now pay no more than £2 for any single bus journey within the city-region, and children £1 – saving around 50% on some trips.

Passengers are also able to make unlimited journeys across all bus operators for no more than £5 (adult) or £2.50 (child) a day.

Around 75% of existing adult and child single tickets in Greater Manchester are currently above the £2 and £1 cap.

The move signifies the biggest change to Greater Manchester’s bus network since deregulation 36 years ago, with around one in three of all existing fare paying passengers set to benefit.

Mayor of Greater Manchester, Andy Burnham, said: "The introduction of simpler, lower fares is the biggest change to our buses for almost 40 years, and a landmark moment towards the delivery of the Bee Network.

"Communities all over Greater Manchester rely on buses, whether that’s to see friends and family, get to school, or work or to access essential services – they are, by far, the most used and relied upon form of public transport.

"With the current cost of living crisis, introducing lower fares for bus passengers is the best way we can help the most people with the cost of travel right now, and why we worked with government and local bus companies to bring it forward by a year."

Given the considerable uncertainty over public transport funding going forward, the Mayor and Greater Manchester leaders have agreed to carry out an annual review of the new fares to ensure that it is financially sustainable.

While the fare cap only applies to single fares and day-tickets initially, leaders are committed to exploring opportunities to extend the cap to other ticket types such as weekly passes.

Mr Burnham added: "We are very much in the early days of this fare initiative, but we will explore the viability of extending the cap to other ticket types, such as weekly. It is all part of our commitment to help as many people benefit from cheaper bus fares as possible.

"My message to the people of Greater Manchester is to now get on board and make full use of our new capped bus fares. We’ll have to review them annually, but the more people that use our buses, the better chance we have of making them permanent. You’ll be helping to build the Bee Network and saving yourself money at the same time."

Funding will come from money that the Government has allocated to Greater Manchester for its Bus Service Improvement Plan (BSIP). Alongside the Government’s BSIP investment, significant additional local funds have also been allocated to improve bus services including the £135m to transition to bus franchising, around £15m per annum to stave off the threat of service cuts and withdrawals and through the extension of Our Pass, providing free travel for 16 – 18-year-olds.

Roads Minister Baroness Vere said: "At a time when people are facing rising costs, it is more important than ever that people can access affordable travel.

"That’s why we have just announced up to £60 million to cap bus fares at £2 from January to March across the country, and we welcome the move in Greater Manchester to save passengers money.

Bus operators will not lose or gain any profit from the new fare structure, with the scheme designed to compensate them for not introducing the fare rise they would have done across these ticket types due to cost inflation.

Lee Wasnidge, Managing Director at Stagecoach Manchester, said: "We are proud to have a long history of connecting communities across Greater Manchester and we welcome these new fares on single and AnyBus day tickets.

"This change means many of our customers will now be paying less for their travel.

"The new fares also make it easier for people to switch to bus and in doing so make a real saving on their travel costs, as well as cutting their CO2 emissions and doing their bit to improve local air quality."